All articles tagged with "Sole Licking"

Madame Marissa and her slave were going for a picnic. But he had insisted he knew a short cut but in following it, they got lost. She was pissed at him and to show him how pissed she was, she made him lick her muddy boots. She forced him to lick them till they were clean and told him if he did not do it, she would crush him using the same boots.

This Polish mistress does not like snitches. Someone had snitched on her and she did not like it. She suffered huge losses and had to make amends. She hunted down the snitch and when she found him, she made sure he paid for all the losses she suffered. She tied him with his hands to his face. She then made him lick the soles of her feet and tied his neck. She kicked him in the balls and tortured him savagely. 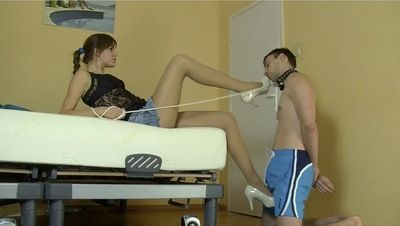