All articles tagged with "Torture"

This mistress has a hot ass and she loves to flaunt it. But today she wanted to do more than flaunt it. She wanted to use it to tease and deny this guy because she wanted to humiliate him. The mistress did not like how he behaved and she felt that teasing and denying him would make him rethink some things. So she turned him on with her ass and teased him then denied him. He begged but she did not let him smash.

This mistress felt that this guy was not as tough as he needed to be and so she used her wooden mules to dominate the guy. Besides crushing his dick with them, the mistress also crushed his hands and watched as he cried. He tried to plead his case but the mistress was not interested in listening to anything he had to say. He had to toughen up by all means possible.

Mistresses tease and deny classmate before dominating him

Mistress Evike and mistress Roberta wanted to have fun at the expense of their classmate because he was full of himself and he despised people. He had a thing for them and they felt that they were best placed to humiliate him and bring him down to earth. The mistresses teased and denied him then they dominated him with their feet which he had to lick and endure smothering from.

Mistress Rissa and her boyfriend were enjoying time alone in a state park when she realized that that was the perfect place to humiliate as well as dominate him and she did not hesitate to do it. She did it in the form of a game which they played and had a bet whereby whoever won could do whatever they wanted to the loser. She won and had him lick her feet as well as her boots.

Ebony mistress gets ass eaten for her birthday

This ebony mistress wanted to get a treat she had never gotten before for her birthday. And she settled for having her ass eaten properly not licked on the surface. So she got this guy who had a crush on her to go to her house. He saw her in a thong and he was turned on. And when she facesat on him he did not refuse. And when she asked him to lick her ass and asshole, he did it like he had been waiting for that moment.

Lady Asmodina wanted to make this guy as she had never made someone cry. She is the kind of person who does not punish people if they do not deserve it so she had to wait for someone she needed to punish before she tried it out. She had the guy kneel down when he let her down and she squeezed his nipples and humiliated him until he cried. That is when she stopped.

Mistress Kennya and her friend mistress Sanders wanted to find out how good this slave was at following instructions so they asked him to lick their boots according to their instructions. He started out badly but as he went on, he improved to the point that the mistresses agreed to give him a second chance and after the second chance, they hired him as he had proved that he was capable.

Mistress Alexis wanted to find out whether ass smothering a guy's dick with her ass would be as painful as doing it with her feet or even with her hands. The mistress flirted with the guy and she made him think that she wanted to mess with him. Then she sat on his dick and his balls then watched for his reaction. It was slow to come as he tried to endure it but when it became too much, he had to ask her to move. 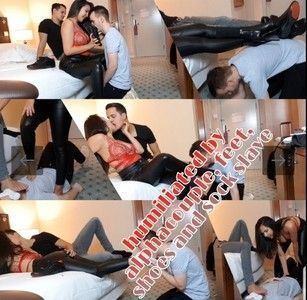